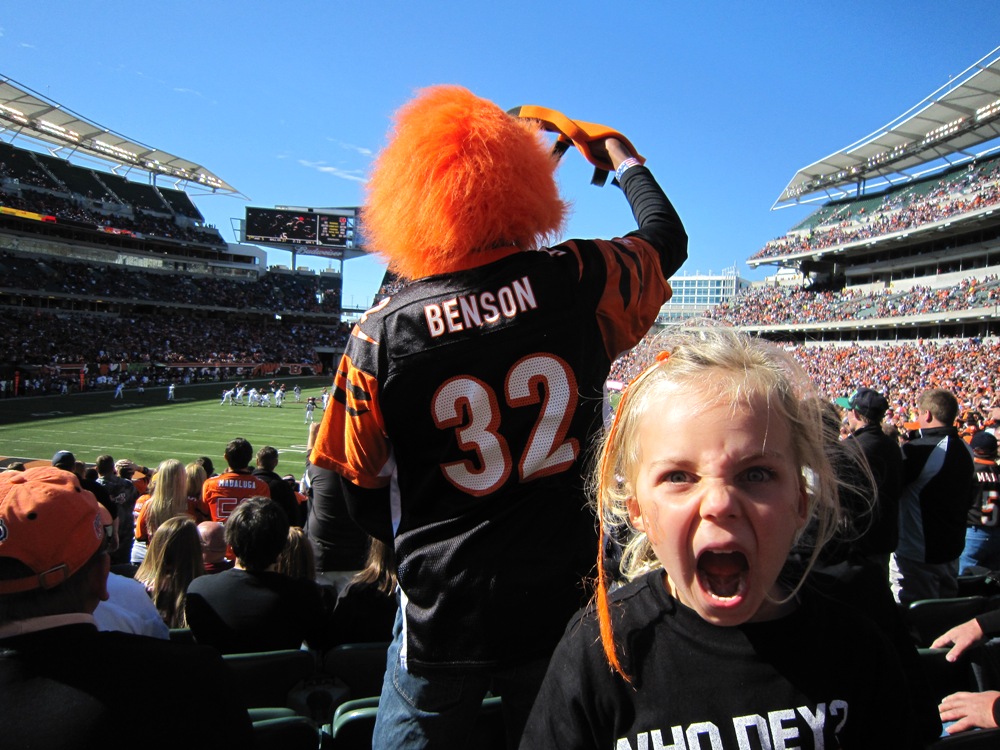 By most people’s standards, I would be considered a hardcore professional sports fan. And while I enjoy following the four major sports leagues, for me – NFL football is my passion. More specifically, indulging my (at times painful) 37 year love affair with the Cincinnati Bengals.

And like a bad romance that hurts so bad it feels so good, I always come back to her. Through the many disappointments, the broken promises and the general feeling that my love and dedication wasn’t appreciated, I’ve always stayed true. And as any long suffering Bengals fan will attest, it hasn’t always been easy. 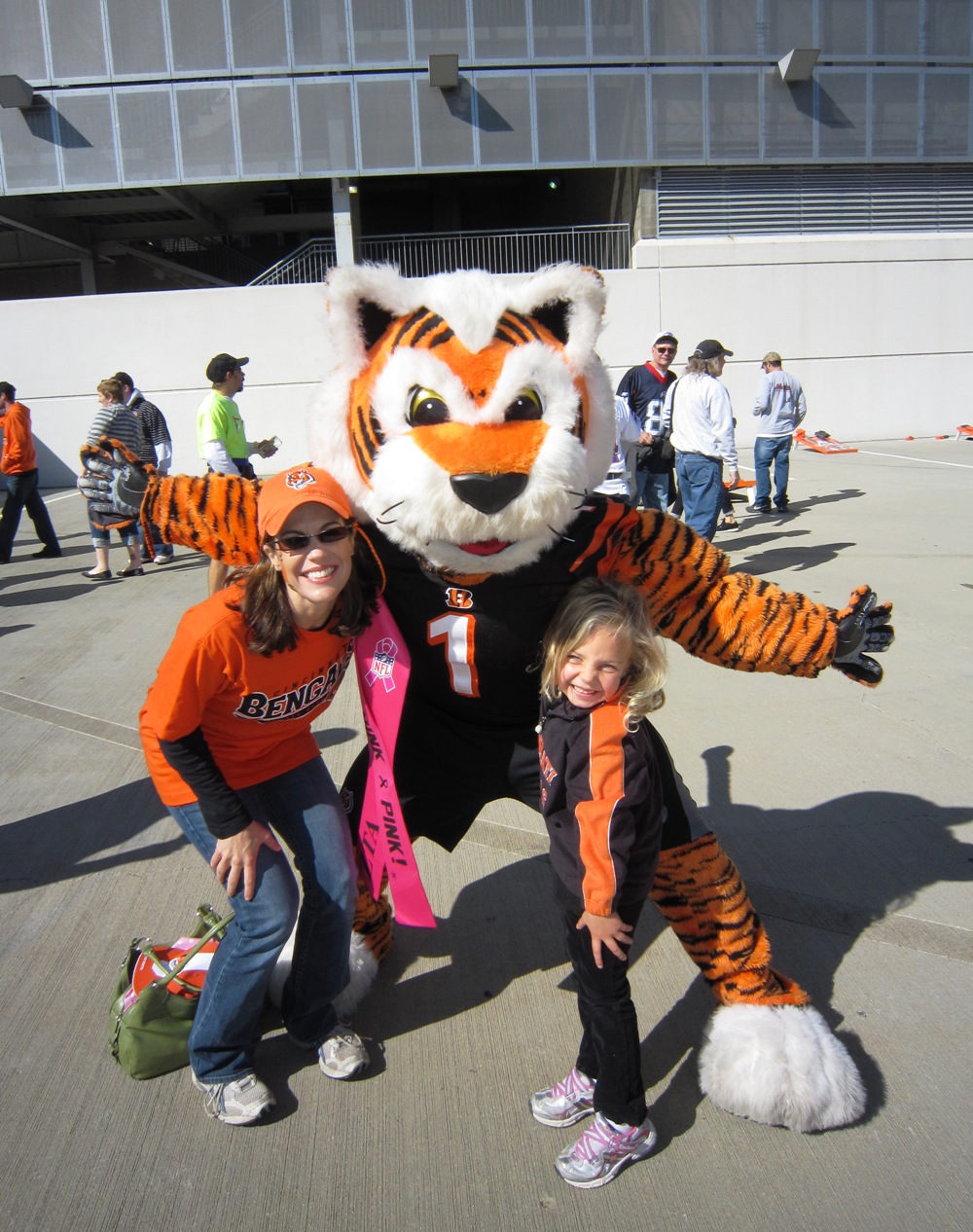 I guess everyone has their own definition of what can be considered a “hardcore” sports fan. No…I don’t have Bengals season tickets and no, I don’t slather on the body paint and put on the orange afro when I attend games. Here’s what I personally consider to be a hardcore sports fan:

A person who is emotionally invested to the point where their mood and mental state is profoundly affected by the wins and losses, player injuries, lack of media coverage and any general perceived injustices bestowed upon their favorite sports team. 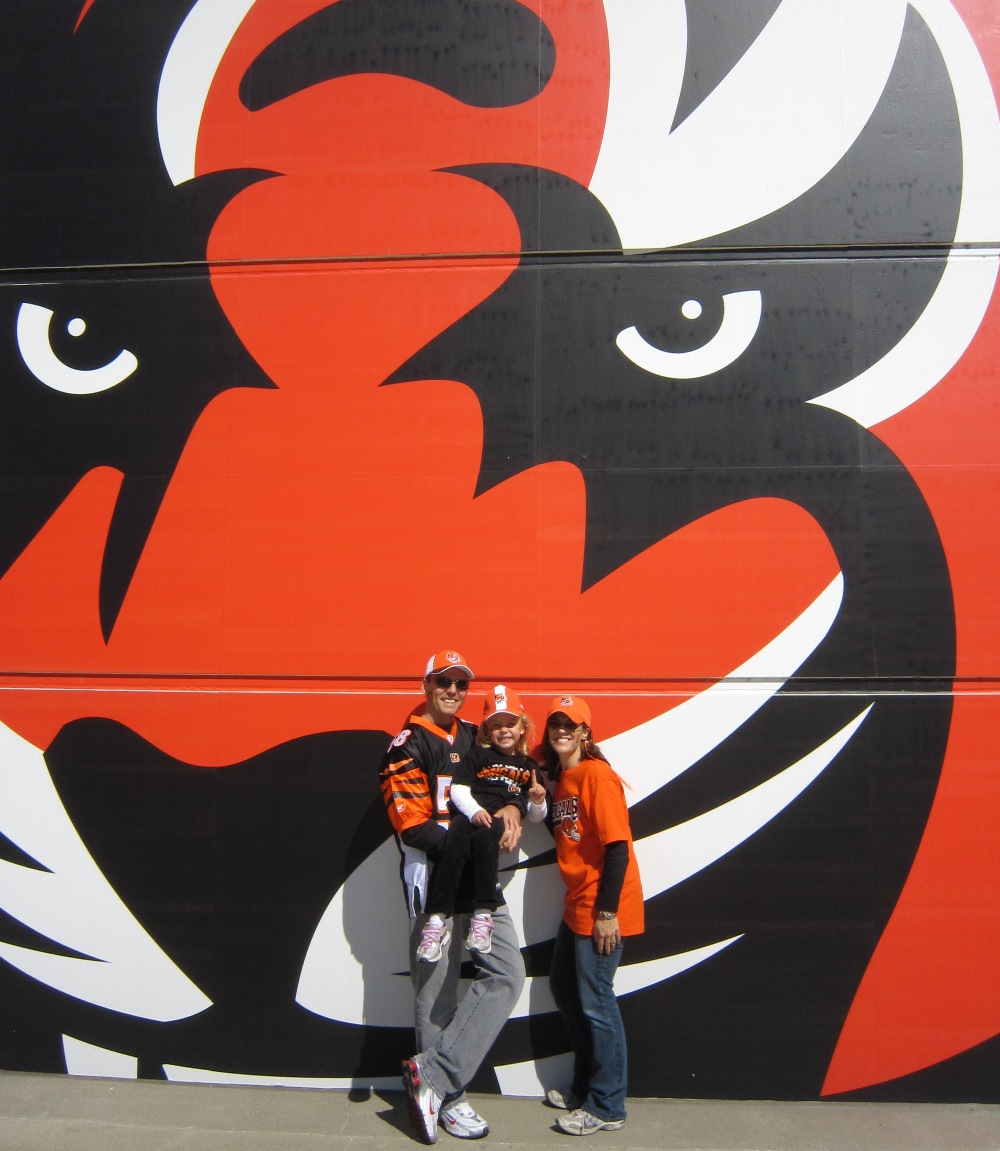 Now, I’ve come a long way (being a Bengals fan really tests your metal). My personal wakeup call to tone it down was when my daughter filled out a questionnaire in Grade 1 about her family.

Q. What makes your Dad happy?

A. When the Bengals win.

Q. What makes your Dad sad?

A. When the Bengals lose.

I have to admit, I’m very lucky to have the loving support of my wife and daughter. I guess they can be considered guilty Bengals fans by association. Like a dedicated therapist, they attend games with me when I know they would probably rather be shopping. They wear Bengals gear when orange and black is far from their favorite colours. And they console me after losses and listen to me rant about blown assignments, dropped balls and crappy ref calls – without actual knowing what I’m talking about – all along reassuring me, the team will bounce back next Sunday! 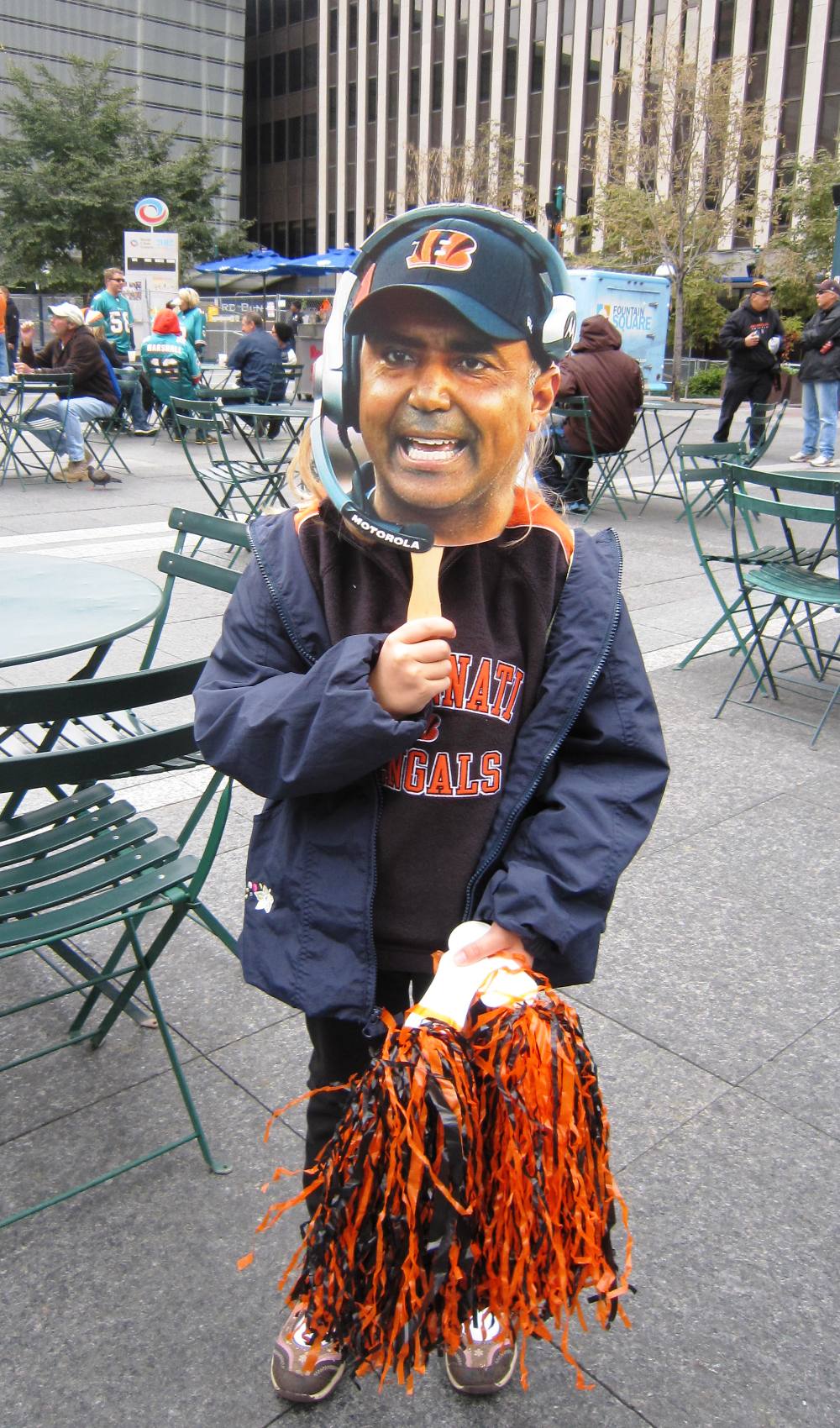 The good news is, things have been looking up for my beloved Bengals. No longer considered the laughing stock of the league and the doormat for the AFC North, they appear to be finally coming into their own as a force to be reckoned with. Having made the playoffs 3 of the last 4 years and with expectations running high for a postseason return in 2013, it’s a good time to be a Bengals fan. 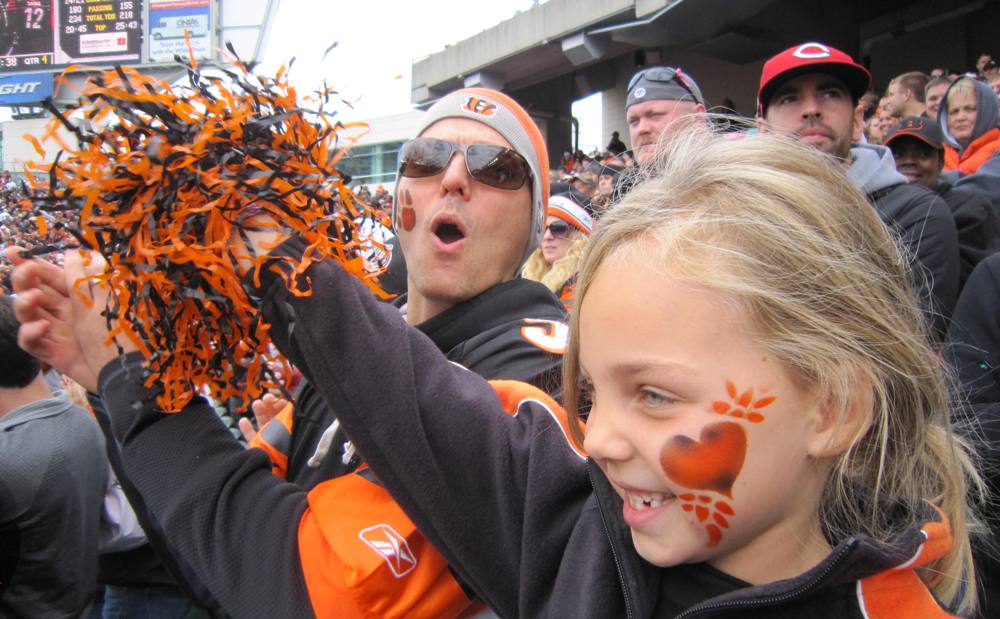 This brings me to a question for my fellow sports fanatics out there. When you attend road games, do you wear your team colours in enemy territory? The majority of Bengals games I have seen have been at Paul Brown Stadium, but I have attended a few road games. With the exception of getting heckled in the stands and intimidated in the concession line by a couple inebriated Browns fans at FirstEnergy Stadium, the road games I have attended wearing my Bengals hat and jersey have been pretty uneventful. 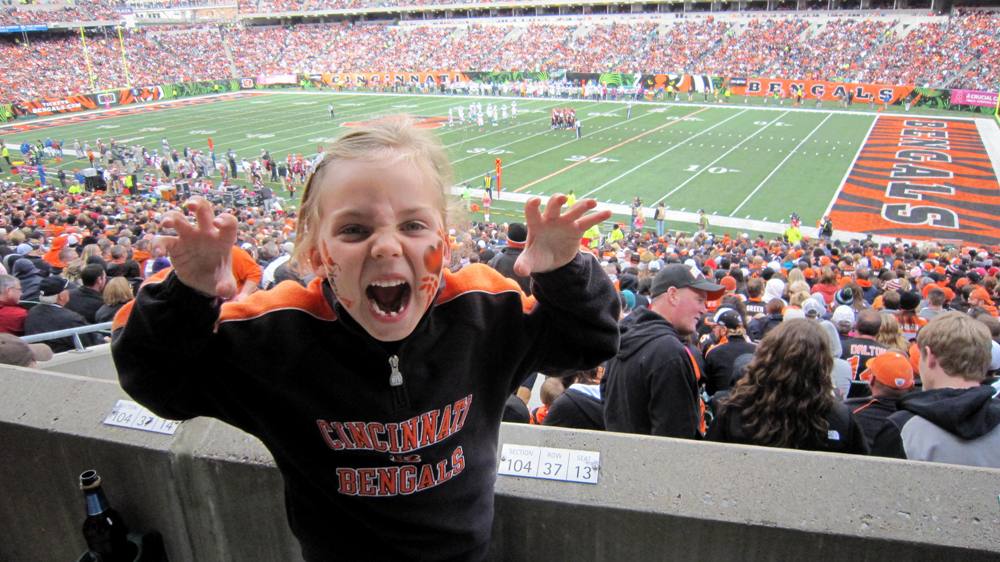 Are there any stadiums where you wouldn’t wear a visiting team’s jersey? There have been a few incidents over the last couple seasons ranging from mild taunting and beer showers, right up to people getting dummied by a sucker punch or shanked in the parking lot. The NFL seems to be cracking down on the potential for fan violence, but anytime you mix unbridled passion, testosterone and alcohol – you have a recipe for trouble.

Incidentally, we’re attending the Bengals at the Lions game on October 20th. Detroit has to be a pretty safe place to be decked out in my Bengals gear proudly rooting on my team, right? What could possibly go wrong. For now, back to the cage. 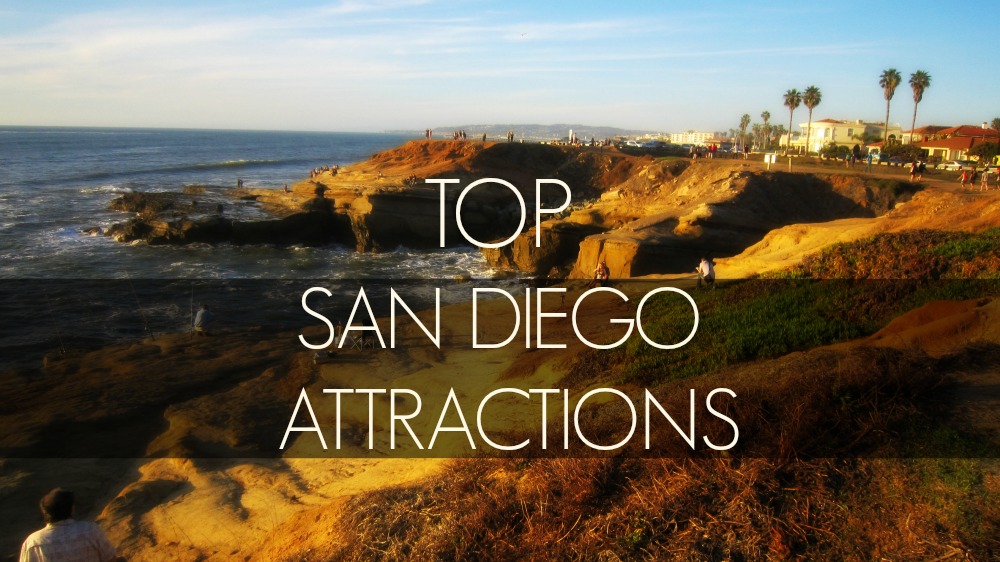 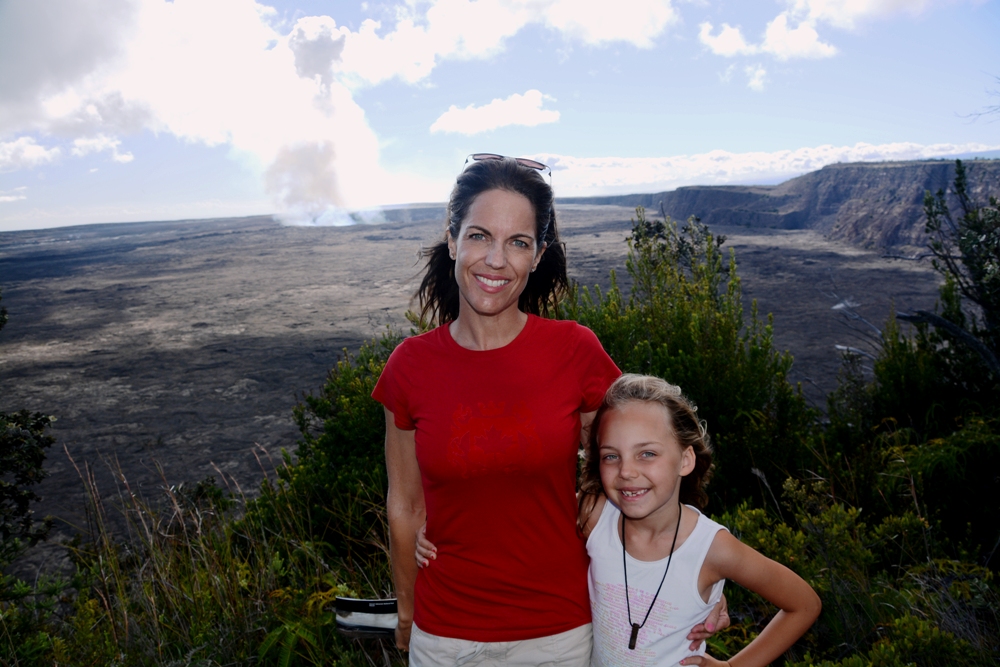